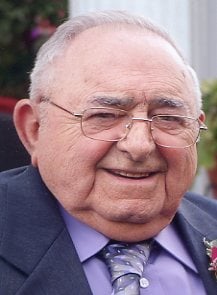 Wendell Smith Bussard, 88 of Calcutta passed away on Thursday, September 24, 2015 at Heritage Valley of Beaver.

He was born in Dayton, PA on February 8, 1927 a son to the late Alton D. and Golda Grace (Bargerstock) Bussard. Living most of his life in this area, he worked as an Expediter at Crucible Steel until he retired in 1982. Smitty was a Presbyterian by faith, a member of the American Legion Post #374, a 55 year member of Masonic Lodge 681 of East Liverpool, a member and 32nd Degree from Scottish Rite Valley of Steubenville and a member of the Al Koran Shrine. He was a WWII Veteran of the United States Army Air Corp serving in Japan during the Pacific Theater.

In addition to his parents he was preceded in death by his wife Louise (Keener) Bussard whom he married December 24, 1950; six brothers: Richard, Paul, Dale, Clinton, James and William Bussard and one sister: Loretta Bussard.

Services will be held at the Calcutta Chapel of the Martin MacLean Altmeyer Funeral Homes on Monday, September 28, 2015 at 1:30 P.M. with Rev. Dr. Steve Cramer of Trinity Presbyterian Church officiating. Burial will follow in Columbiana County Memorial Park where the Tri State Burial Group will accord full military honors.

Family will be present to receive friends at the Calcutta funeral home on Sunday, September 27, 2015 from 3 to 7 P.M. with Masonic Services being held at 6:30.