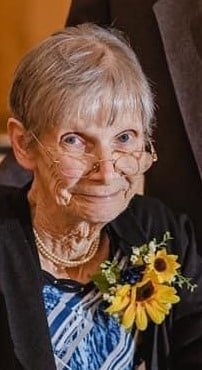 Virginia Icy Poe, 84, of Calcutta, passed away on Saturday, October 1, 2022,  at Calcutta Health Care, after a six year battle with cancer.

Virginia was born in Hartford, WV on April 12, 1938, the daughter of the late Howard and Nellie (VanFossen) Rowand.  Virginia, “Ginny”, or “Boots” as some friends and family knew her, was a 1956 graduate of Wells High School.  Virginia was a bus driver for Beaver Local and eventually began her career as a well known rural mail carrier who often left candy in the mailboxes of her customers with children, as well as yearly Easter Bunny shaped eggs to all on her route.  She was also known for her constant supply of Werther’s caramel flavored candies.  Virginia served as a leader for the Camp Fire Girls during her daughters’ early years.  She was also an active Beaver Local band booster mom during her children’s school days.  She was a great bowler who, at one time, scored a perfect game.  She loved feeding the birds and her “little critters”.  Virginia had a contagious smile, was quick witted, funny, and loved by all who knew her.  She always said “you have to laugh and keep your sense of humor”.

On June 2, 1956, she married the love of her life, Robert Poe, and they spent the next 62 years making memories together.  Bob and Virginia loved the neighborhood of loyal friends they lived in and enjoyed spending time in their yard together.  They worked side by side and at one time won the Yard of the Month award.

Along with her parents, Virginia was preceded in death by her three brothers: Clarence “Sonny” Rowand, Ernie Rowand, and Andrew Rowand.

On October 4,2022, three days after Virginia’s passing, her beloved husband, Bob also passed away. Visitation will be held for both Virginia and Bob  on Thursday, October 6, 2022 from 2PM-4PM and from 6PM-8PM  at Care Funeral & Cremation Specialists- Martin Chapel in Calcutta.  The funeral for both Virginia and Bob will be held on Friday, October 7, 2022 at 11AM with Pastor Vel Vais from Glenmoor Presbyterian Church officiating.  Visitation will also be held one hour prior to service time on Friday.  Virginia and Bob will be laid to rest together in Columbiana County Memorial Park.