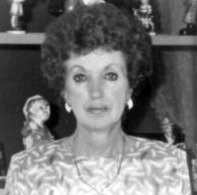 Sally Ann Prince was born January 24, 1937 the ninth child of twelve to Charles Ellsworth and Nettie Perdue Prince in East Liverpool. She was raised on the family farm at Shadyside. Together, with Sondra and Judi the trio sang professionally in the 50’s as The Prince Sisters with The Johnny Chick orchestra. Sally was an honor graduate of her East Liverpool 1954 Potter Class; an active planner and participant for class reunions – she enjoyed perfect attendance.

On Friday, January 13, 1956 Sally wed Glenn H. Lynn in Winchester, Virginia where they had eloped. She worked for the Ohio Power Co. and he worked at Crucible Steel. Together, they built a home, raised a family and lived a satisfying life in Columbiana County. Their marriage spanned 52 years. Sally retired from the treasurer’s office of East Liverpool Schools. Her civic affiliations include: Sweet Adelines, West Point School PTA room mother for her 3 children, Ohio Eastern Stars, Junior Women’s Club – winning statewide 1st place seamstress honors, and loyal friends groups over a lifetime. She was a wonderful scratch cook and baker who provided well for her husband and children.

Sally believed in the America First policy and she was a staunch supporter of President Donald J. Trump.

Sally was grateful for each person who helped her to live independently at home after Phillip was struck with cancer and died. Last Thanksgiving, she enjoyed a home-cooked turkey & ham dinner delivered by Mike Blaner and shared with sister Judi who cooked the meal. This April, after 2 months of the Orchards rehab from hip surgery, Sally chose to go live at Calcutta Health Care Center because she needed lots of help and she wanted smoke breaks. She felt safe there, was cared for, well-fed and enjoyed her outdoor smoke breaks with friends. She appreciated the caring aides, nurses and dietary workers, stating “These people work HARD! They don’t walk these halls, they run.” Early October, the China virus stole Sally’s appetite and quarantine ruined her daily satisfaction. She had stated, “When it’s my time, it’s my time.”

Visitation will be held from 2PM-4PM Thursday, October 21, 2021 at Care Funeral & Cremation Specialists- Martin Chapel in Calcutta. The funeral will follow at 4PM with Patrick Williams officiating. Burial will be in Columbiana County Memorial Park.