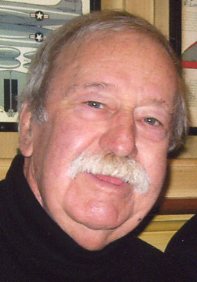 He was born in Wellsville, Ohio on February 21, 1943 a son to the late Ronald L. and Mabel (Thomas) Gibson. Ronald lived his entire life in this area, was a 1962 graduate of Wellsville High School and a Veteran of the United State Army serving during Vietnam. He worked for Crucible Steel as a Heater before retiring in 1981, for Keywell Steel retiring in 1995 and as a local driver for the Wellsville Foundry retiring in 2006.

He was a former Rep. for Steel Workers Local 1212, a Co-Founder of the Touchdown Club in Wellsville and belonged to the Alliance Parachute Club. Mr. Gibson enjoyed meeting with friends every morning for coffee, watching his grandchildren play sports, was a strong supporter of the Wellsville Junior Tigers for many years and was a big Steelers fan.

He is survived by his wife Terry (Cathell) Gibson whom he married in 1964; two sons: Gregg M. Gibson and his wife Tonya of Summitville, OH and Ryan L. Gibson and his wife Bobbie of Toronto, OH; a daughter: Stephanie O’Hara and her husband Pat of Calcutta, OH; four sisters: Alice Pickens of Akron, OH, Charlotte Lewis of Columbiana, OH, Delma Fultz of Wooster, OH and Linda Dorsey of East Liverpool, OH; Grandchildren: Jillian and Erin O’Hara, Dominic and Josef Gibson, Savannah, Leah and Jackson Gibson.

In addition to his parents, he was preceded in death by two brothers: Edward and Ralph Gibson and three sisters: Nancy Hancock, Marge Davis and Mina Hitt.

Services will be held at the Calcutta Chapel of the Martin MacLean Altmeyer Funeral Home on Monday, October 12, 2015 at 1:30 P.M. with Pastor Dirk Hall of Living Well Church officiating. Burial will follow in Spring Hill Cemetery where the Tri-State burial group will accord full military honors.

Family will be present to receive friends at the funeral home in Calcutta from 11 AM up until the time of the service.