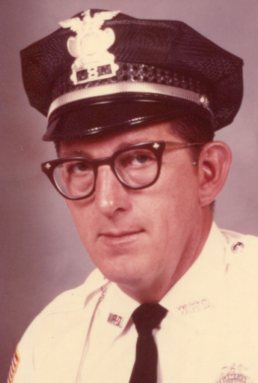 Perry W. Daniels, age 85, of Wellsville, passed away at the Calcutta Health Care on Sunday, June 11, 2017, after a lengthy illness.

He was born at home in Wellsville on May 28, 1932, a son of the late Emmett and Mary (Tice) Daniels and had lived his entire life in Wellsville.

Before his retirement, Mr. Daniels went through Ohio Peace Officers training in 1979 and was a Police Officer in Wellsville for 30 years and during this time he had worked to acquire the first police dog, “Steuben”. He had also worked as security for former President, Jimmy Carter. He was a Village Administrator in Wellsville at one time, and was the founder of Daniels Plumbing and Heating and attended Grace Baptist Temple.

Mr. Daniels was a member of the Fraternal Order of Police # 11 in Wellsville and was named a Wellsville Legend in 2014. Perry, along with Jack Gallagher were the founders of the Jim Kenny Center.

In addition to his parents, he was preceded in death by 3 children: Perry Daniels Jr., Nathan Daniels, and Brenda Daniels; three brothers: Emmett Daniels, Jim Daniels, Elmer Daniels and one sister: Alice Daniels.

Services will be held at the Wellsville Chapel of the Martin MacLean Altmeyer Funeral Homes on Thursday, June 15, 2017 at 5 PM with Pastor Gaylord Cox of the church officiating. Burial will follow in Spring Hill Cemetery. The Fraternal Order of Police will conduct services prior to the funeral service. Following the services the family will gather for food and fellowship at the Simply Elegant Banquet Hall on Main Street.

Family will receive friends at the Wellsville funeral home from 1:00 PM up until time of services at 5:00 PM.