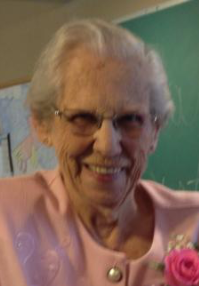 She was born in Middlebourne, West Virginia on June 2, 1924 a daughter to the late Charles and Rachel (Wildman) Spencer. Mabel was a graduate of Middlebourne High School and lived most of her life in this area. She was a homemaker and a member of Hope Christian Fellowship in Wellsville, Mabel was active in the Good SAMS RV Club and volunteered for 14 years at the Desoto Memorial Hospital in Arcadia, FL.

She is survived by a son: Jerry Baker, whereabouts unknown; a daughter-in-love: Betty Ayers and her husband Douglas of East Liverpool, OH; grandchildren: Charles Baker and his companion Kathy McElroy of Wellsville, OH and Mary Ellen Triner and her companion Dario Salomon of Bellefontaine, OH; great grandchildren: Stephanie, Zachary and Jackie Triner all of East Liverpool, OH and one great great granddaughter: Kalilah Triner.

In addition to her parents she was preceded in death by her husband Raymond G. Baker; a daughter: Karen Baker and two brothers: Arthur and Junior Spencer.

Services will be held at the Calcutta Chapel of the Martin MacLean Altmeyer Funeral Homes on Monday, June 5, 2017 at 3 PM with Pastor Donny Lytle of the church officiating. Burial will take place at a later date in Middlebourne, West Virginia.

Family will be present to receive friends at the Calcutta funeral home on Monday, June 5, 2017 from 1 until the time of the service at 3 PM.