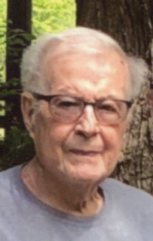 Lester Ansley Hickman, 91 of East Liverpool passed away at his residence on Wednesday, July 4, 2018.
He was born in East Liverpool, Ohio on April 5, 1927 a son to the late James and Nannie (Robinson) Hickman. While always maintaining his home in the area, he traveled extensively during his career in education and ministry. Lester was a graduate of East Liverpool High School and received his Doctorate from Toledo University in 1978, was a Veteran of the United States Army serving during WWII. He worked as a teacher for East Liverpool Schools in 1976, was a chairman in the education department at Roberts Wesleyan College from 1973-76; a superintendent for Millcreek-West Unity School District from 1969-73; a teacher for Greenford High School from 1967-69; the principal for East Liverpool Schools from 1965-67; principal for Beaver Local Schools from 1954-56; a director at Colgio Americano para Varones in Barranquilla, Colombia from 1960-65; superintendent for Hopedale Local Schools from 1956-60 and a teacher for Highlandtown from 1951-54.
Lester was a pastor for Mount Zion United Methodist Church since 1985, was a lifetime member of the National Education Association and a Phi Delta Kappa.
He is survived by two sons: Philip Hickman and his wife Linda of Selinsgrove, PA and Timothy Hickman and his wife Suellen of East Liverpool, OH; a daughter: Elizabeth Hickman of East Liverpool, OH; grandchildren: Sean Hickman and his wife Carli of LaJolla, CA, Donovan Hickman and his wife Dawn of Aurora, OH, Eric Hickman and his wife Dawn of Ventura, CA, Kira Lantz of East Liverpool, OH and Ashley Hickman of Selinsgrove, PA and fourteen great grandchildren.
In addition to his parents he was preceded in death by his wife Elaine (Taylor) Hickman whom he married August 19, 1950; a son: David Hickman; eight brothers: Homer, Robert, Charles, Paul, Kenneth, Francis, John and Ralph Hickman and two sisters: Irene Mast and Elma Hadley.
Services will be held at the Calcutta Chapel of the Martin MacLean Altmeyer Funeral Homes on Monday, July 9, 2018 at 11 AM with Pastor James Rhodes of Mt. Zion Methodist Church officiating. Burial will take place in Calcutta United Presbyterian Cemetery.
Family will be present to receive friends at the Calcutta funeral home on Sunday, July 8, 2018 from 12 to 4 PM and 6 to 8 PM.
Family and friends may view this obituary or send condolences online at www.martinmacleanaltmeyer.com or by visiting the funeral homes Facebook page.