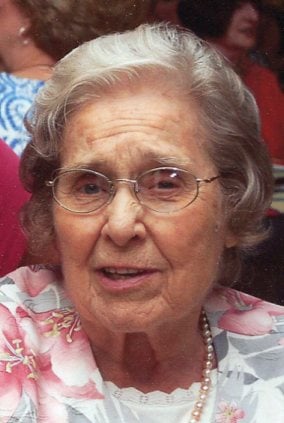 June A. Robinson, 91 of East Liverpool passed away at her residence Thursday, September 22, 2016 following a brief illness.

She was born in East Liverpool November 14, 1925 the daughter of the late Cyril and Myrtle (Walker) Plant. Living her entire life in this area, she was a 1943 graduate of East Liverpool High School and worked as a bookkeeper for Superior Dairy before retiring in 1982. June was also a member of St. Stephens Episcopal Church.

She is survived by a son: Raymond F. Robinson Jr. of Youngstown, OH; a daughter: Linda Sue Robinson of East Liverpool, OH; a sister Lorraine McGraw of Texas and a special friend Deb Thomas and Rascal.

In addition to her parents, she was preceded in death by her husband Raymond F. Robinson Sr. whom she married July 1, 1950; two brothers: Cyril Plant Jr. and Roy Plant and two sisters: Esther Waite and Donna Betts.

Services will be held at the Calcutta Chapel of the Martin MacLean Altmeyer Funeral Homes on Saturday, September 24, 2016 at 11 AM with Rev. Steven McKeown of the church officiating. Burial will take place in Columbiana County Memorial Park.

Family will be present to receive friends at the Calcutta funeral home on Friday, September 23, 2016 from 5 to 8 PM.

Family and friends may view this obituary, sign the guest book or send condolences online at www.martinmacleanaltmeyer.com of by visiting the funeral homes Facebook page.