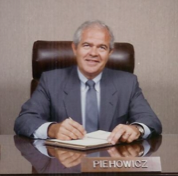 The son of the late Anthony (Andy) and Julia Lengyel Piehowicz, he was born in Bellaire, Ohio on May 24, 1935.

He was preceded in death by his parents, his wife of 62 years, Martha Ruthers Piehowicz, son-in-law, Dennis Zaccagnini, and Great-Grandson, Everett Flor.

John graduated in 1953 from Bellaire High School where he excelled on the football team. He starred as Co-captain of Intell’s 1952 All-Ohio valley Class A All Star Football Team. John was President of the Holy Name Society at St. Michaels Catholic Church in Bellaire. He was a founding member of the Bellaire Police Department’s Fraternal Order of Police, where he served as an officer. He was deputy Treasurer of Belmont County for several terms, owner of the Golden Goose Tavern in Bellaire, and retired as Deputy Director of the Ohio Department of Natural Resources.

John was proud of and loved spending time with his children and grandchildren. He loved traveling,fishing, and sharing stories of when Bellaire was The All American Town.

There will be a Memorial Mass for John at a later date.

Condolences may be expressed to the family at carechapel.com