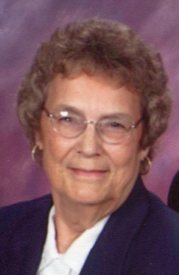 Joanne F. MacLean, 87, of Wellsville, passed away on Wednesday, December 6, 2017 at Calcutta Health Care following a lengthy illness.
She was born in Calcutta, Ohio on October 11, 1930 a daughter of the late Stanford and Ruth (Dotson) Fitzsimmons. Joanne was a 1948 graduate of East Liverpool High School and earned her Associate Degree from Kent State University East Liverpool Campus. She became a licensed funeral director and worked with her husband, Daniel N. MacLean, whom she married on October 14, 1951, at the MacLean Funeral Home in Wellsville for many years.
She was a member of the Riverside Presbyterian Church where she served as an elder and had taught Sunday school in the Primary Department for many years. Joanne was also a member of the Ohio Funeral Directors Association, the Wellsville Historical Society and a member of the Tri-State Tour Riders. Joanne was also an active member of the Book Club at the Carnegie Library, a volunteer for R.S.V. P. for the Medical Assistance Program, a volunteer reader at Garfield Elementary, a member of the Session at Riverside Presbyterian Church, an avid bridge player and worked at the Board of Elections as a Pole Worker for many years, in addition, she was well known for her cakes at the Riverside Café and was one of the pie bakers of the church.
In addition to her husband, whom she just celebrated a 66 wedding anniversary with, she is survived by a son: Daniel N. “Skip” MacLean III of Wellsville, OH; two daughters: Karen L. MacLean of Lisbon, OH and Heather Hitt and her husband Mike of Wellsville, OH; three grandchildren: Jacob MacLean Hitt, Cody Michael Hitt and Kelly Danielle MacLean and two sisters: Erma Fritz of Chester, WV and Mary Isabel Lowe of Placerville, CA.
In addition to her parents she was preceded in death by a sister: Doris Osborne.
Services will be held at the Riverside Presbyterian Church in Wellsville on Saturday, December 9, 2017 at 11 AM with Rev. Dr. Duane Hetzer of the church officiating. Burial will follow in Spring Hill Cemetery.
Family will be present to receive friends at the Wellsville Chapel of the Martin MacLean Altmeyer Funeral Homes on Friday, December 8, 2017 from 2 to 4 and 6 to 8 PM.
The family would like the thank Calcutta Health Care for the wonderful care Joanne received and request that Memorial Contributions may be made to Riverside Presbyterian Church.
Family and friends may view this obituary, sign the guest book or send condolences online at www.martinmacleanaltmeyer.com or by visiting the funeral homes Facebook page.