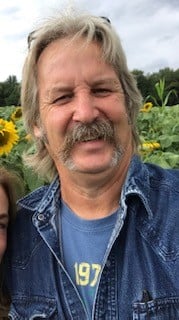 Jeffrey A. Russell, age 64, died on September 20, 2021 at his home surrounded by family following a two year illness.

The son of Charles Russell of East Liverpool and the late Shirley (Moyer) Russell, Jeff was born in East Liverpool on September 21, 1956 and had lived his entire life in the area. Jeff was a graduate of Beaver Local High School, Class of 1975, he was employed at the W.H. Sammis power plant as an instrument operator until his retirement in 2019. Jeff was known for lending a hand to all and loved to spend hours of porch time talking with friends and family.  He spent his free time hunting morels, maintaining the farm, and finding hidden treasures with his metal detector.

Jeff is survived by his spouse Sheila; father Charles Russell; one son, Ethan Russell and wife Kali of Carrollton, Texas; one brother, Mark Russell, of East Liverpool;  and one sister, Debra Garren and husband Bill, of Franklin, N.C.

Private burial was held on Friday, September 24, 2021 in the Columbiana County Memorial Park.

Arrangements were handled by the Martin Chapel of the Care Funeral and Cremation Specialist in Calcutta.

Friends may view this obituary,  send condolences to the family, and sign the guest book at carechapel.com