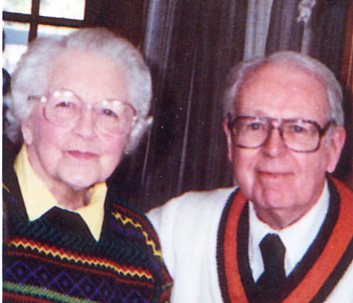 Jean E. Reaney Baxter, 95 died peacefully Thursday, December 17, 2015 at Valley Oaks Nursing Center with loving family at her side. Jean was born April 21, 1920 in East Liverpool to parents James A. and Adeline (White) Reaney.  She was raised on St. George Street in East End where her grandfather, James Grant Reaney, was pastor of the 2nd United Presbyterian Church.  Maternal grandfather, David F. White, had a real estate/insurance business on Mulberry Street and her uncle, Adnal White founded the First Federal Savings and Loan on Pennsylvania Avenue.  Her father, Jim Reaney, was Executive Vice President and Trust Officer of the First National Bank of East Liverpool.

Jean attended East End’s Garfield Elementary School where she proudly “skipped” 4th grade (because she could already work all the 5th grade problems).  Jean considered this part of God’s plan for her life since it placed her in the East Liverpool High School Class of 1937 where she me the love of her life, Donald Baxter.

After high school graduation, Jean rode the train daily to Pittsburgh to attend Grace Martin Secretarial School. After completion of her training she obtained a secretarial position at Ohio Power Company in East Liverpool. Jean and Don Baxter were married June 14, 1941.  They were active members of First Presbyterian Church (now Trinity) on 4th Street where they were Charter members of the Amikitia Club for young married couples in the 1950’s.  They taught Sunday school but were most proud of their work with Junior High Youth.  Members of Jean’s girls’ Sunday school class and their Youth Fellowship Groups have maintained loving contact with her to this day.

Husband Don had a long career of 42 years with Ohio Power Company primarily in East Liverpool but also in Portsmouth, Tiffin and at company headquarters in Canton. In all these residencies they were active in civic affairs but lovingly continued their church work with adolescent youth.  Don passed away in 1999.

Jean was the oldest of 5 Reaney sisters. She was predeceased by Marjorie Harp (of Jupiter, FL), Carolyn Pollock (Bellevue, OH) and Martha Gaston of East Liverpool.  Her youngest sister, Sue Hillier survives in Mt. Vernon, OH as well as sister-in-law, Berta Baxter of East Liverpool.

The family will be present to receive friends at the Calcutta Chapel of the Martin MacLean Altmeyer Funeral Homes on Sunday, December 20, 2015 from 2 to 8 P.M. and one hour prior to services at Trinity United Presbyterian Church.

In lieu of flowers, Jean’s family suggests donation be made to Trinity Presbyterian Church for Youth Programs.