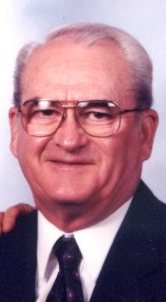 He was born in Alexandria, Ohio on September 17, 1930 a son to the late Casper and Oma (Lockwood) Dumbauld. Ed was a 1948 graduate of Alexandria High School and worked as a Foreman for Quaker State for 17 years and Pure Oil for another 17 years before retiring in 1988.  He was a veteran of the United States Air Force and enjoyed woodworking.

In addition to his parents he was preceded in death by two brothers and their wives: Fred and Maxine Dumbauld and Bob and Edna Dumbauld and a sister and her husband:  Ruth and Bill McCullough.

Services will be held at the Wellsville Chapel of the Martin MacLean Altmeyer Funeral Homes at 6 PM on Friday, March 18, 2016 with Rev. Mark McTrusty of the Centenary United Methodist Church in East Palestine officiating. Burial will be in Spring Hill Cemetery.

Family will be present to receive friends at the Wellsville funeral home on Friday, March 18, 2016 from 2 to 6 P.M.