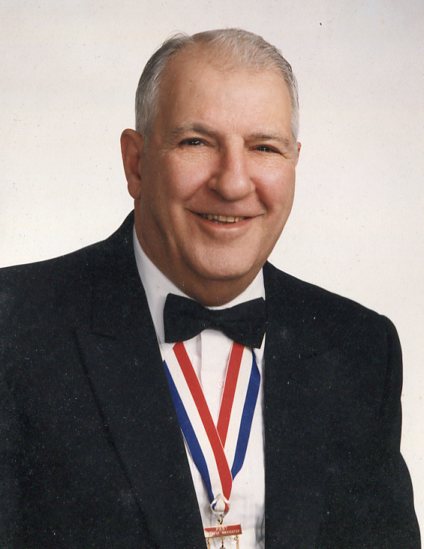 Fred A. Baldasare, lifelong resident of Wellsville, passed away at 96 on September 10th.

He was born May 19th, 1924, the youngest son of Italian immigrants Theresa Sarangelo Baldassarre and Lorenzo Baldassarre, who came to the US from Italy in 1910 and 1901, respectively.

What was important to Fred?  After family and friends, in no certain order – dedication and devotion, loyalty, service to community.  The Catholic Church.  The Knights of Columbus.  The Red Cross.  And Notre Dame.  Always Notre Dame.  Fred used to say, “GOD doesn’t care if Notre Dame wins.  But, His Mother does.”  Actually, Lou Holtz said that.  But, Fred happily took credit for it.

Fred was a lifelong parishioner of Immaculate Conception Church in Wellsville until its’ closure in 2011.  He attended grade school at Immaculate Conception as well prior to graduating from Wellsville High School in 1941.  He spent many hours volunteering in a number of roles at the Church and, in true Fred fashion, reminded his five children of it repeatedly.

After graduation, Fred was employed as an electrician by Penn Central Railroad which later became Conrail.  His service was interrupted during World War II when he spent a couple years including time overseas as a Sargent in the US Army Air Corps in both the United Kingdom and Germany.  Fred used to say that despite his best efforts, the US survived his service…but Germany did not.

Fred began his next career in 1987 when he became Wellsville Health Commissioner.  He later served in a similar capacity in Toronto and East Palestine before retiring…for real this time…in 2005 at age 80.

Over the years, Fred was involved as a volunteer with numerous community service organizations including the American Red Cross where he served as Chairman of the Board of Directors in Columbiana County.  He was also actively involved with the Boy Scouts, Minor League Baseball, Springhill Cemetery, Eagles, Moose, American Legion, Sons of Italy and more.

But, he was most proud of his involvement with the Knights of Columbus where he was a 4th degree member and remained active for 71 years until his passing.  Joining in 1949, he served in several leadership roles at the local, district and state levels including Grand Knight of Wellsville Council #507 in 1951 – 52. In 1969, he was a delegate to the Knights of Columbus National Convention in Connecticut.  And, in 1989, he was honored as Knight of the Year for Council #507.

Fred had a lifelong love affair with all things Italian – Italian beer and wine, pizza, pasta, salami and provolone and pretty much any food that was red.  Italian singers, movie stars and athletes.  And Spaghetti Westerns.   Dean Martin, Joe DiMaggio, Sophia Loren and Rocky Marciano were a few of his heroes.  He visited Italy and his relatives there on several occasions and spoke somewhat fluent Italian.

His love affair with cigars – Italian, Cuban, Dominican or otherwise – was legendary.  And, it was a well-kept family secret that he was a closet cowboy at heart as his TV heroes were Ben Cartwright, Matt Dillon, John Wayne and pretty much anyone who wore a cowboy hat.  Even if they weren’t Italian.  In fact, his favorite movie was the western classic “Shane” (you should see it if you haven’t!)  and its’ closing scene (“Shane, come back…”). Fred would call that the greatest movie scene of all time.

Fred was a prolific gardener, growing Wellsville’s biggest tomatoes, hottest peppers, longest green beans and any spice you can pronounce (and some you can’t).   When he wasn’t gardening, you could usually find him in his easy chair, cigar in hand, reading anything he could get his hands on, especially books on the Revolutionary War period.  His favorite book?  “Give ‘em Hell, Harry”, a semi-biographical book on past President Harry Truman.

A reunion with family and friends is no doubt underway Upstairs as it has been awhile between visits –they are, without question,  sitting on the back porch, drinking Genesee (or Old Milwaukee) in a can, smoking El Productos (the “Cadillac” of cigars according to Fred) and watching Notre Dame win…again.  Fred would invite old friends Ed Welch, Bill Daugherty and Eddie Weeks, even though they weren’t Italian.  Of course, none of this would happen until after Fred had a cup of coffee with Ara Parseghian to discuss game strategy prior to the Notre Dame kickoff.

He was preceded in death by his parents, Theresa and Lorenzo Baldasarre, and five brothers and sisters – Rocco Baldasarre,  Ferdinand Baldasarre, Angeline DeSarro, Mary Fregiato and Antonette Baldasarre. All eight family members lived to be 93 or older except Ferdinand who died a year after birth and Lorenzo, who passed away at 85 in 1970.

He is survived at home by his wife Jean (married in 1953) sons Larry (Cindy) in Pittsburgh and  Rick (Joan) in West Chester (Cincinnati); daughters  Terry, Maria (Rick) Lyons in Everett (Boston) and Dana in Wellsville.  Also surviving are 8 grandchildren – Natalie, Gabrielle, Nicholas, Carli, Courtney and Rocco Baldasare (born on Fred’s birthday) and Francesca and Giovanna Pucci.

The family will be present to receive friends at CARE (MacLean Chapel) Funeral Home in Wellsville (509 Riverside Avenue) are on Wednesday, September 16th from 3 – 7 p.m.  A Mass of Christian Burial will be celebrated on Thursday, September 17th at 11 a.m. at Sacred Heart Church in Chester with Reverend Jeeson Stephan as celebrant.  Interment will follow the Mass on the family plot in St. Elizabeth Cemetery in Wellsville where he will be accorded military honors.

In lieu of flowers, if you are inclined to make a donation in Fred’s memory please send to –