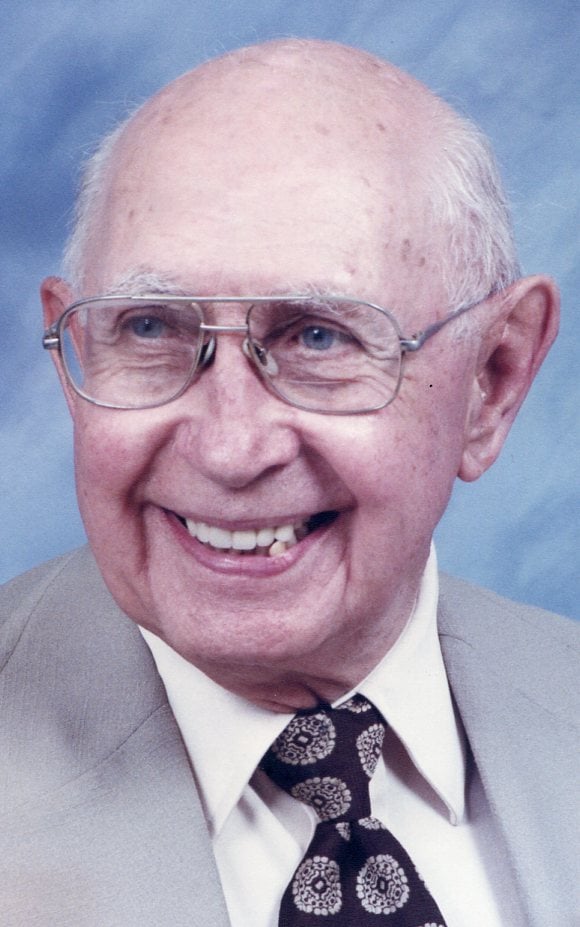 Everett M. Anderson, 103 of East Liverpool, Ohio went home to be with the Lord on April 13, 2019. He passed away peacefully, surrounded by his family. He was born on July 20, 1915 at Big Run, WV, the son of the late William Douglas and Lulu (Stoneking) Anderson.
Mr. Anderson attended Pine Grove High School, Glenville State College, Fairmont State College and Kent State University. He taught six years in the Wetzel Co, WV school system and 13 years at East Liverpool High School, where he also served one term as President of the ELEA. He also worked for Craven Parts Service Co. and Dan Cook Enterprises. He was a member of the Ohio Retired Teachers Association and the Columbiana County Teachers Association.
For many years, Mr. Anderson had been a member of the Calcutta Church of the Nazarene where he served as a Sunday school teacher and a member of the church board. In the most recent years he attended and became a member of the St. Clair Avenue Church of Christ. He was an avid gardener and could be seen working in his garden up until the last year. He loved animals, especially Carla & Phoebe his canine companions.
He is survived by three daughters: Lois Jean James of Gadsden, AL, Karen (Bill) DeSarro of East Liverpool and Jody (Jim) Ferry of Greenville, PA; seven grandchildren: Scott (Scherry) DeSarro, Todd (Leslie) DeSarro, Holly (Kevin) Simpson, Jay Mathews, Mark (Heather) James, Ana Ferry and Alex Ferry; seven great grandchildren: Hudson, Haley and Jaxon James, Alyssa DeSarro, Kala Smith, Chance DeSarro and Halie Brock; three great great grandchildren: Alivia and Madison Butler and Gianna DeSarro; several nieces and nephews and his longtime friend and companion, Alberta Howe.
In addition to his parents he was preceded in death by his wife of 60 years Helen L. (Starkey) Anderson; one brother: G. Lee Anderson; a sister: Beatrice Shafer; one granddaughter: Kelly DeSarro and two great granddaughters: Paige and Amanda DeSarro.
Services will be held at the Martin MacLean Altmeyer Funeral Homes on Wednesday, April 17, 2019 at 1:30 PM with Evangelist Will Montgomery of the church officiating. Burial will take place in Riverview Cemetery.
Family will be present to receive friends at the Calcutta funeral home on Tuesday, April 16, 2019 from 2 to 4 & 6 to 8 PM.
Memorial Contributions may be made to the St. Clair Avenue Church of Christ.
Family and friends may view this obituary or send condolences online at www.martinmacleanaltmeyer.com or by visiting the funeral homes facebook page.