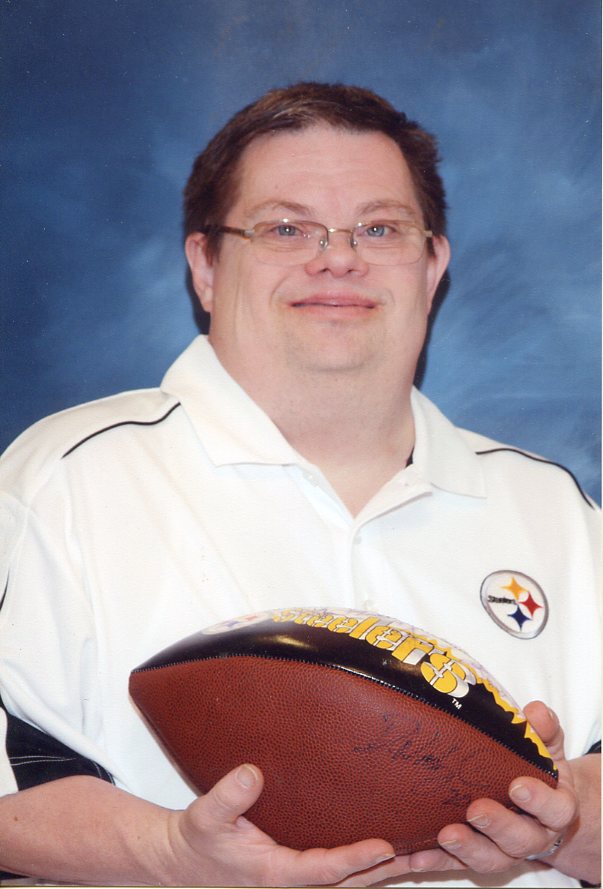 Eddie Arnold Black of Calcutta, Ohio passed into Heaven on Monday, January 25th, 2016, while in his mother’s arms and surrounded by his family from a lengthy illness.

He came into this world on November 23rd 1960 in East Liverpool, and gave his proud parents Zella (Robinson) Black and the late Arnold Black 55 years of joy, laughter, and fond memories for years to come. He was also preceded in death by his niece Jennifer Roach. Surviving are two sisters Judy (Gregg) Householder and Debbie (Randy) Wilson both of Calcutta. Nephews, John Robinson of Chester, and Danny Wilson of Strongsville, and by a niece Melissa (Roach) Davis of Calcutta. Great nieces and nephews, Kendall Robinson of Texas, Jacob and Hayden Robinson of Chester. Alexandria, Preston, and Izabella Ward of Calcutta. Brody Wilson of Strongsville. Eddie attended Robert Bycroft school in Lisbon from the age of 5 years until he was 18.  He then attended EDI Workshop in Calcutta for over 25 years. He was a member of the Nazarene Church in Chester for over 35 years, and attended the East Liverpool Church of the Nazarene for 20 Years.

He was active in special Olympics with track and bowling, and a favorite pastime of his was watching football. He was an avid fan of the Ohio State Buckeyes and the Pittsburgh Steelers.

He enjoyed listening to all kinds of music, and would sit for hours playing the guitar, harmonica, and singing. Nobody had the heart to tell him he was tone deaf. Over the years Eddie received many special cards from friends wishing him well, and he felt pretty important getting all that mail. One of his special places to have a meal was Hoge’s where he was always spoiled with a pudding to go, compliments of his good friend Mary Ann. On one occasion a very special friend took him for a treat of ice cream. In asking Eddie what kind of ice cream he wanted, the friend tried to describe the different flavors that he could get.  He asked Eddie if he wanted pink ice cream. To that Eddie responded ” You call it pink, I call it Strawberry”. Within that answer was a lesson for the friend, look beyond the mental challenge you think you see. Throughout Eddie’s life, he was blessed with many special friends, caring teachers, and caregivers, and for that, his family is forever thankful. If you knew Eddie, then you already have many fun stories to tell, because there was never a dull moment when he was around. God will now get that special time with his newest Angel.

Services will be held at the Calcutta Chapel of the Martin MacLean Altmeyer Funeral Homes on Saturday, January 30, 2015, at 11:00 AM with Retired Pastor Tim Bess, Pastor Bob Sylvies, and Retired Pastor Dayton Lockard officiating. Burial will follow in Columbiana Co. Memorial Park.

Family will be present to receive friends on Friday from 3 to 8 PM.

Memorial contributions may be made in Eddie’s name to E.D.I. or the Sheltered Workshop at 16529 Sprucevale Road Calcutta, Ohio 43920 or on www.tmcfunding.com

Friends may view this obit, sign the guest book or send condolences online at www.martinmacleanaltmeyer.com.