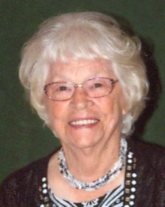 Dorothy M. Ewing, 91 formerly of the Wellsville & Salineville area, went to be with her Lord and Savior, rejoining her husband Andrew J. Ewing, on Wednesday, April 26, 2017. Her husband, whom she married in 1947, preceded her in death on September 24, 1978.

She was born January 26, 1926 in Salineville, Ohio a daughter of the late Armine and Florence B. (McLean) Miller. Dorothy was a 1943 graduate of Wellsville Highs School. She worked at France Bakery in East Liverpool and Sterling China Pottery in Wellsville prior to her marriage. She was a member of the Free Methodist Church, Pittsburgh Conference.

She is survived by her daughter, with whom she resided, Denise Repella and her husband John of Salem, OH, one son: John P. Ewing and his wife Donna of Columbiana, OH; five grandchildren and eleven great grandchildren: Chastity Jarvis and her husband Tom and their daughters: Zoe and Grace of Mt. Eaton, OH; John Ewing and his wife Mary and their children: Austin and Farrah of Lisbon, OH; Heidi Swiger and her daughters: Hannah and Hope of New Middletown, OH; Hayley Miller and her husband Greg and their daughters: Harmony and Abigail of Massillon, OH; Holly Kibler and her husband Kevin and their children: Kyle, Sarah and Daniel of Rootstown, OH; two sisters: Josephine Beatty and Ronda Miller; one brothers: Clarence Miller and a sister-in-law: Marge Miller all of Wellsville, OH; along with several nieces and nephews.

In addition to her parents and husband, Dorothy was preceded in death by three sisters: Mae Miller, Evelyn Taggart and Vivian Taggart and a brother: Curtis Miller.

Services will be held at the Calcutta Funeral Home of the Martin MacLean Altmeyer Funeral Homes on Monday, May 1, 2017 at 11 AM with retired Pastor G. Ricky Riggs officiating. She will be laid to rest in Oak Ridge Cemetery.

Family will be present to receive friends at the Calcutta funeral home on Sunday, April 30, 2017 from 4 to 7 PM.