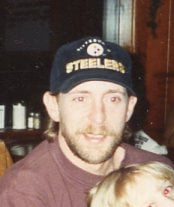 Dennis R. Dreier, 64 of East Liverpool, Ohio passed away on Thursday, August 1, 2019 at Community Hospice House in New Philadelphia, Ohio surrounded by his family.
He was born in East Liverpool, Ohio on May 20, 1955 a son to the late Robert and Helen (Bartley) Dreier. Living his entire life in this area, Dennis was a 1974 graduate of Southside High School and worked in Sanitation for the City of East Liverpool. He is survived by two sisters: Bobby Ann Ieropoli of Guilford Lake, Ohio and Melissa Walker of Lisbon, OH and many nieces and nephews.
In addition to his parents he was preceded in death by a brother: Fraser J. Dreier.
A celebration of Dennis’ life will be held at a later date.
No services or calling hours are planned. The Martin MacLean Altmeyer Funeral Homes in Calcutta has been entrusted with his arrangements.