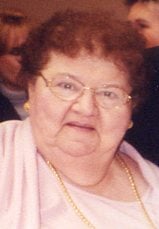 Constance A Bangor, 89, of East Liverpool passed away Thursday, February 11, 2016 at East Liverpool City Hospital following a lengthy illness. She was surrounded by her loving family in her final days.

She was born Constance A. Lako in Chester WV on September 2, 1926 the daughter of the late Samuel J and Edith V. Chill-Lako. In addition to her parents she was preceded in death by her devoted sister Mary J Lako-Ross.  Constance graduated from Chester High School in 1944.  She married the late Richard L. Bangor on November 21, 1946, who preceded her in death on March 26, 1992.  Together they raised 5 children including an infant daughter, Ruth Ann Bangor, who died on September 26, 1951.   She is survived by her children Mary Ann Bangor (Bill) Hogue, Richard W. Bangor, Joyce A. Bangor (Bruce) White, and Randall J. (Joyce) Bangor.  In addition she leaves behind ten loving and faithful grandchildren, Justin (Thara) Watson, Lindsey Bangor, Matthew (Brenda) Watson, Ashley (Erica) Bangor, Nathan (Richelle) Watson, Zachary Bangor, William Hogue, Alexandra Bangor, Nicole (David) Dozier, and Allison White.  She is also survived by eight great grandchildren, Cadence Watson, Chloe Watson, Gabriella Watson, Natalie Watson, Melanie Watson, Maddox Watson, Austyn Dozier, and Garrett Dozier.  She leaves behind many faithful family and friends who were a loving source of comfort and pride.

Constance is to be remembered for her devout Christian faith, love of family and friends, and her passion for music. For over 60 years she devoted her life to St. Aloysius Church as sacristan and seamstress, principal organist, choir director, music instructor at St Aloysius School, and music minister-liturgist. During her faithful service she held many leadership and organizational positions in the New Life Funeral Choir, CCD Instructor, East Liverpool FISH Organization, Christian Family Movement, Parish Council, Catholic Daughters of America, Altar and Rosary Society, and Catholic Women’s Club.  In her declining years she continued to serve as liturgist for masses, funerals, prayer line ministries, and her love of sending cards.  She now serves God directing the choirs of cherubim and seraphim in divine harmony.

The family wishes to extend their sincere gratitude and appreciation for the professional and compassionate care our mother received at Calcutta Health Care Center and East Liverpool City Hospital. To everyone who touched her life at both facilities we are eternally grateful.

Family will be present at the Calcutta Chapel of the Martin MacLean Altmeyer Funeral Home on Sunday, February 14, 2016 from 2:00pm to 8:00pm.

Services will be held at the Holy Trinity Parish at St. Aloysius on Monday, February 15, 2016 at 11:00am with the Fr. Bernard Gaeta and concelebrants. A celebration of her life will continue immediately following the ceremony at Sacred Heart Center, in Chester, WV.

In lieu of flowers, the family requests that donations be made to the Connie Bangor Organ Fund online at www.tmcfunding.com or through The Holy Trinity Organ and Music Ministerial Fund.