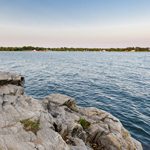 Colin John Clarke, 69 of East Liverpool passed away, Sunday, December 24, 2017 at Calcutta Health Care following a one year illness.
He was born in Ellwood City, PA on April 26, 1948, the son of the late Colin J. and Alice (Campbell) Clarke. Colin was a 1966 graduate of Lincoln High School in Ellwood City and attended Penn State University for 2 years and was a veteran of the United States Navy. He lived in t his area for 33 years, working at First Energy as a Nuclear Reactor Operator before retiring on May 1, 2004.
He is survived at home by his wife, Constance (Lambur) Clarke whom he married February 4, 1984; a sister: Carol Baldwin; his mother-in-law: Dorothy Lambur; a brother-in-law: Michael Lambur and his wife Sharon; nephews: Douglas Bender and his wife Kerri, Robert Baldwin, David Baldwin and his wife Marie and Garrett Lambur along with seven great nieces and nephews.
His family will be holding a memorial service at a later date.
Family requests contributions be made to the American Cancer Society or a charity of your choice.
Family and friends may view this obituary, sign the guest book or send condolences online at www.martinmacleanaltmeyer.com or by visiting the funeral homes Facebook page.