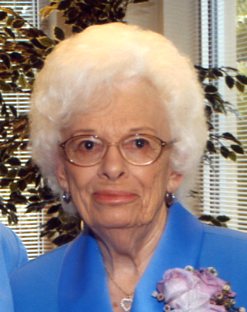 Clara was born in East Liverpool on July 16, 1921 a daughter of the late Stanley and Julia (Vannoy) Winters. Clara was a graduate of Woodrow Wilson High School Class of 1941. After moving to the area she worked as a finisher at Homer Laughlin, and later as a cashier at Rite Aid in Calcutta. She enjoyed reading, crochet’ and knitting, adored her dogs and loved spending time on cross country camping trips.

Clara is survived by a daughter Julie (Gerami) Hughes and her husband Dennis of White Hall MD; a step son: Ralph Mathias Jr. and his wife Colleen of East Liverpool;, a step-daughter: Kay Rambo and her Husband Norm of East Liverpool; and a sister Mary Dillon of Youngstown OH.

In addition to her parents Clara was preceded in death by her first husband Leo Gerami who died August of 1955, and her second Husband Ralph Mathias who died January of 2007.

In accordance with Clara’s wishes a private funeral service was held at the convenience of the family. Burial followed at Columbiana County Memorial Park.

Family and friends may view this obituary and leave online condolences by visiting our Facebook page or at our new website www.martinmacleanaltmeyer.com.