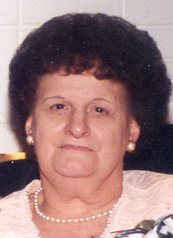 She was born in Wellsville, Ohio on February 1, 1934 a daughter to the late John and Florence (Spencer) Gibas. Betty lived her entire life in this area attending Wellsville High School and working as a Sales Clerk for Allens Shoe Store and S&S Shoes. She was also a former member of Immaculate Conception Church.

In addition to her parents, she was preceded in death by her husband Donald M. Scott in 1977; a son: Donald P. Scott and sisters: Bonnie Nightingale and Mary Louise Barth.

Services will be held at the Calcutta Chapel of the Martin MacLean Altmeyer Funeral Homes on Saturday, August 1, 2015 at 11 AM with Pastor Norman Eckert of the Beechwood Free Methodist Church officiating. Burial will follow in Columbiana County Memorial Park. Following the service, family and friends will gather at the Martin MacLean Altmeyer Hospitality Center at the East Liverpool Chapel for food and fellowship.