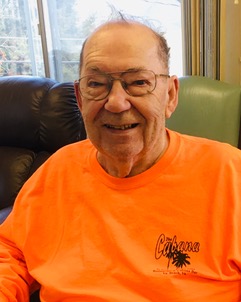 Art was a kind soul who most enjoyed being surrounded by his family and prided himself on being a loving and attentive “Pap.” Family and friends will remember Art for his generosity and the joyous laughter he shared with all. He cared how others were doing, formed friendships easily, and relished telling a story or speaking in an accent just to make someone smile. Art was an avid Mountaineer fan and a steadfast supporter of the Steelers and Pirates. He enjoyed playing games, performing music, drawing, and discussing history. Anyone who knew Art could tell a story of his kind nature and wonderful sense of humor. Most notably, Art’s family and friends will cherish the many joyful times they had with him and the unconditional love he taught them.

Art’s family extends their heartfelt gratitude to the staff on the seventh floor at Peterson Geriatric Center for caring for Art as if he was part of their family over the last year.

In keeping with Art’s jovial spirit, a Celebration of Life open-house memorial will be held at 303 Jones St. in Wheeling on December 1, 2018, from 1:00 p.m. to 6:00 p.m. In lieu of flowers, please make memorial donations in Art’s name to The Amedisys Foundation (https://regions.billeriq.com/ebpp/AmedisysFoun/) or Center for Dementia Research (http://cdr.rfmh.org/support.html).